Chlorella vulgaris and Chlorella pyrenoidosa are eukaryotic, unicellular green algae that inhabit freshwater environments. They are from the genus Chlorella, a long-studied chlorophyte algae with an incredibly inventive name derived from the Greek “chlor” (green) and the Latin “ella” (small). They were originally isolated in 1890 by the Dutch microbiologist Martinus Willem Beijernick from ponds near his city. When he isolated and grew them in cultures, he noted that “The green colour was almost as strong as that of the grass at the shore, through a layer of water of one centimetre block letters couldn’t be read.” Chlorella cells in general have a spherical cell body with a diameter of 2-10 micrometers and contain a single, cup-shaped chloroplast. Inside the cell body, numerous starch grains can be seen, which are used to store and sequester the energetic byproducts of photosynthesis for later use. These grains surround the pyrenoid, an organelle within an organelle that assists the chloroplast with the concentration of carbon dioxide used to create sugars during photosynthesis. The genus possesses a particularly thick cell wall (a whopping 100-200 nanometers!) that is quite rigid and is thought to be a defense against predators. They can also be found in colonies up to 64 cells or on their own. 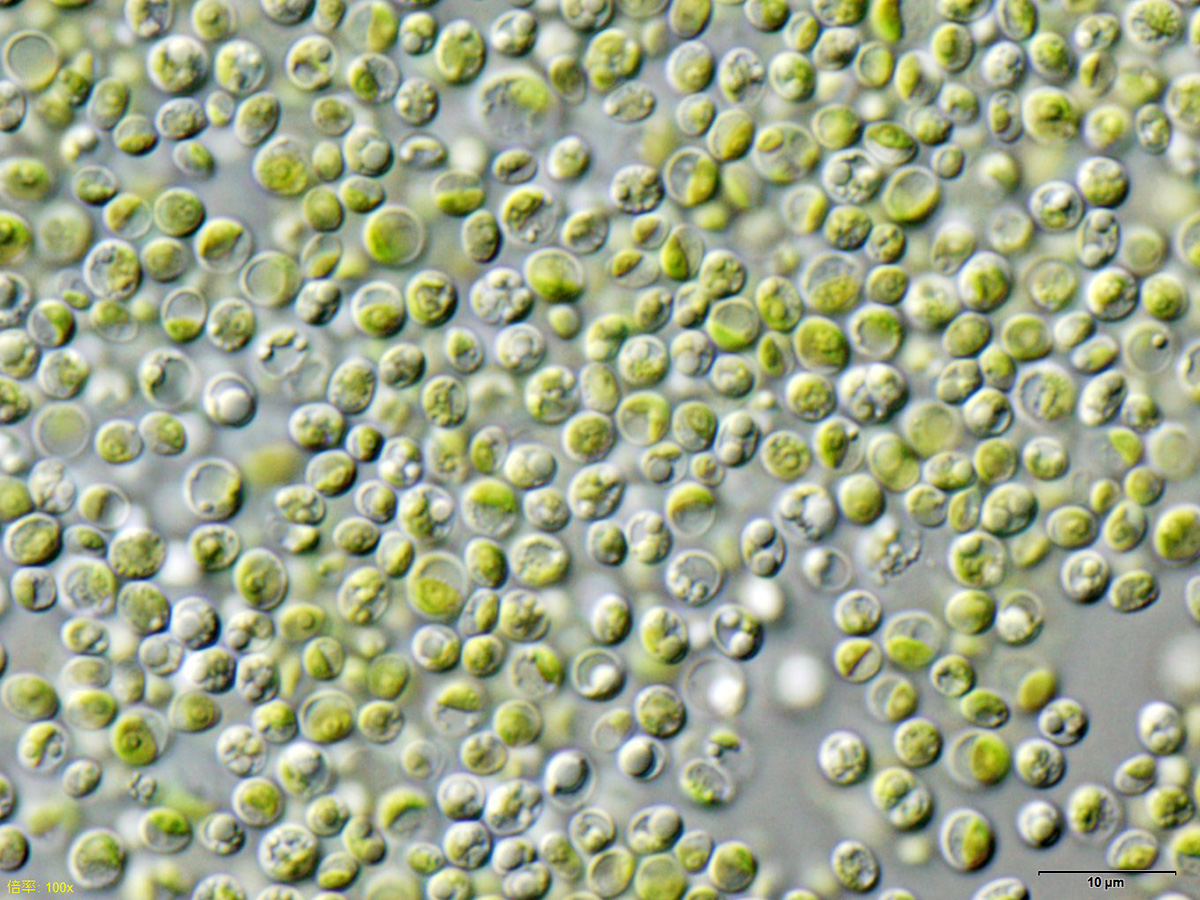 Over the more than 125 years since the discovery of Chlorella, many generically green and spherical cells were misidentified as being part of the same genus. They are a relatively generic cell, especially when only comparing species through a light microscope. With the development of DNA sequencing and bioinformatics, it was discovered that many of the cells that inhabit the class Trebouxiophyceae were mischaracterized as being different morphs of Chlorella when they were in fact not. This pattern also ran in reverse: 7 new species were discovered to be in the Chlorella genus when they were previously mischaracterized as being from a separate evolutionary lineage. When whole genomes are examined, the evolutionary distance between green algae like Chlorella and land plants is closer than the distance between Chlorella and brown and green algae! Protein-coding genes for receptors and enzymes that interact with land-based chemicals like auxin (important in the bending of plant stems and leaves towards light) and cytokinin suggest that the evolutionary ancestor of green algae and plants shared these traits before land plants were even established. 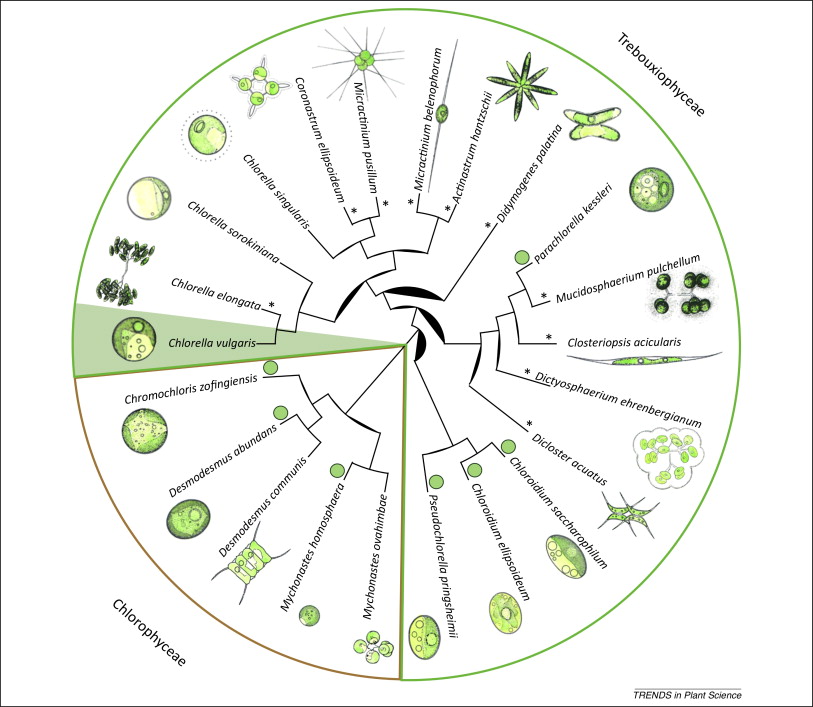 Chlorella’s life history and life cycle is unique relative to most other algae. It reproduces differently than some other algae, which would typically divide from one cell into two in a process called “binary fission”. Inside the cell wall of Chlorella “multiple division” takes place, producing two non-flagellated autospores which then split into four. The mother cell wall then bursts, releasing the autospores. Though this is the only reproductive mode known to exist in Chlorella, sequencing of the genome shows genes responsible for meiosis, suggesting that previously undiscovered modes of sexual reproduction may exist.

Chlorella are primarily autotrophic, which means they create their own energy in the form of sugars. This is not the only mode of nutrition that the genus can take advantage of, however. Under low-light conditions or in the presence of carbon sources they do not need to create themselves, Chlorelle can be mixotrophic, or both auto and heterotrophic at the same time. This is an incredibly useful adaptation, as it allows cells to take advantage of energetic carbon sources when they exist to bypass the energetic input necessary to perform photosynthesis.

While Chlorella can live entirely as its own in whatever environment it inhabits, they are an essential part of many different symbiotic or parasitic interactions. They can form symbiotic relationships with Paramecium ciliates as well as hydras, which turns the organisms from transparent to dotted green. Chlorella has been shown to provide nutrients to their symbionts in exchange for what is probably a combination of safety from predators and carbon for sugar formation. They have also been identified as parasites that infect the gills of fish like bluegills, where they form cysts composed of multiple cells. The reason for this infection is broadly unknown, but incredibly interesting.

Chlorella, particularly Chlorella vulgaris, has been used as a model organism and a source of alternative energy research since the 1970’s. Their prolific growth as well as hardiness allows researchers to experiment with how to increase the already high 42% lipid content of the species to produce biofuels. This content percentage is already as high or higher than other biofuel sources like sugarcane and soybeans, and with current 21st century technology they can match fuel oil prices per barrel of $63.97. As mentioned above, costs may be able to be reduced if an additional source of carbon is added to the growth media, which can allow Chlorella to grow mixotrophically in lower light intensities relative to purely autotrophic growth. Cells do grow faster and to a higher density under mixotrophic conditions, which is useful for biofuel production efficiency. Purely autotrophic cells may also have their growth increased by immersing the flask containing them in a solution of gold and silver nanoparticles, which can select for wavelengths based on particle size and allow the cells to receive more efficient wavelengths.

Because of their high lipid and protein content, Chlorella cells were studied after the second World War as a means to increase the foodstocks needed to sustain a growing world population. Researchers from prominent US institutions predicted that roughly 20 workers staffing a 1000 acre farm could produce enough algae to generate 10,000 tons of protein per year. Cells could also be dried and powderized to make an additive for conventional foods. At the time however, the barriers to making Chlorella powders or pills tasty or edible, as well as the costs associated with artificial lighting and carbonation of growth media for efficient growth led to the idea losing popularity. But with rising overfishing and the hope of a decrease in beef production due to the associated greenhouse gas production, Chlorella species may see a resurgence! All we need is a green-thumbed Gordon Ramsey. And money, obviously. 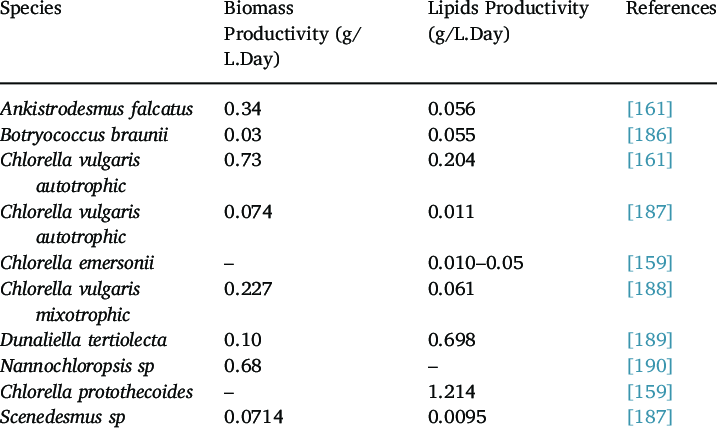 Biochemical composition of Chlorella under autotrophy or mixotrophy compared to other comparable algal strains (Credit: Table 5 of DOI 10.1016/j.rser.2017.10.029)